The Apple bundle that wasn’t

I put forward a few predictions for Apple's By Innovation Only event in my last post, most of which were unfortunately off the mark. First off, no bundles were announced. Second, the lowball bundle price of $34.99 I predicted ended up being the actual price for all four services together with Family Sharing included, rather than for just one individual.

The bundle that was announced

As Jason Snell put it in his article on Six Colors:

The Apple TV+ bundle that isn’t a bundle

A purchase of a new iPad, iPhone or Mac will get a year’s subscription to Apple TV+. It’s not what a lot of people were anticipating, but it’s the closest thing to a bundle that Apple announced during the event. A saving of $60 for the year (where the subscription automatically renews afterwards) isn’t much, but may prove essential in getting the service on its feet.

I still believe Apple Arcade, which has been released a few days early, is a great deal at $4.99 and I’ll be trying it out. The initial games look interesting (video: 100 games in a 100 seconds), plus there are no in-app purchases.

The Apple TV+ service comes down to the content. At $4.99, I think it’s equally worth testing.

How much will Apple’s new services cost?

Apple’s It’s Show Time event in March 2019 saw many new services being announced, most of which casually omitted pricing, release and subscription information. With Apple's increasingly push into services, they're introducing more and more monthly subscriptions to their users that could be bundled into one payment.

The idea of a bundle is not for the user to save cash, but often to encourage the use of a service (or services) that you might not immediately pay for. For example, not everyone is interested in gaming; Apple Music may not be relevant if you have Spotify; and Apple News+ already doesn't seem to be off on the best foot. A great way to increase their usage is to include them with other services.

Apple could release a package made up of:

I have not included iCloud Drive storage in the bundle. If Apple release a media-focussed bundle1, I believe it would be one set price, instead of giving too many options like a bundle with 100 GB of storage or bundle with 1 TB of storage. This could be solved by offering unlimited storage, but with Apple's stern stance on 5 GB of default iCloud Drive storage, it seems unlikely.

We already know the price of some services:

We don’t know the price of Apple Arcade yet, but it could easily fall in line with the others: a few games a month, each for a few dollars, $9.99 with Family Sharing included, similar to Apple News+. Guilherme Rambo from 9To5Mac found evidence of a more competitive price through App Store APIs, however:

According to a promotional message found in the service, the price for Apple Arcade will be $4.99 / month, including a one-month free trial.

$5 would be an amazing price (and I certainly wouldn't hesitate), but isn't consistent with Apple's usual expensive practices.

Apple TV+ pricing is more difficult to pin down. Unlike its biggest competitors, like Netflix and Hulu (and now Disney+), Apple TV+ will only offer original programming—no back catalogue of older shows or films.

Their budgets are not in the same ball park yet, either. For perspective, Apple reportedly invested $1 billion in producing original content across 2017 and 2018, whereas Netflix was closer to $8 billion, reportedly going up to $15 billion in 2019.

There is, however, one advantage to no back catalogue: Apple's original content likely wouldn't need to be locked to any regions. The service could be pushed in 100+ countries to 1.4 billion devices on launch, something the other services cannot directly boast.

The standalone price of Apple TV+ could mirror Apple Music: $9.99, $14.99 with Family Sharing. This puts them more on par with the likes of Netflix and Hulu, rather than the new, aggressively-priced offering from Disney+.

The most obvious alternative is no bundle pricing at all, everything costs between $10–15 individually, and potentially includes a free month as a trial.

Apple Music subscribers could be offered a one month trial to test Apple TV+ entire service. With only a handful of shows, the keenest users could binge through the entire catalogue within the first month, or be hampered by an inconvenient episodic release schedule, as suggested by Mark Gurman, Anousha Sakoui and Lucas Shaw at Bloomberg:

The company is considering offering the first three episodes of some programs, followed by weekly installments

Releasing a standalone subscription for Apple TV+ seems logical, but at $9.99 for one person, it may be too pricey to compete in households that already have a Netflix, Amazon Prime or other subscriptions.

Apple Arcade encourages a push away from pay-to-win style games to standalone games with no additional purchases. One potentially great strength is built-in Family Sharing: the ability to pay one price to give access to the same games to your kids, parents or siblings.

Whether Apple Arcade is to be your main gaming outlet, or secondary to a console, the inclusion of wireless controller support in iOS 13 makes the prospect even sweeter. Bundling a trial of Apple Arcade in a purchase of a new Apple TV or gaming controller could be interesting. At $10 a month, it's worth a try and, at $5, it's a steal.

Apple's next special event is set for Tuesday, 10 September 2019.

FWD+ is a blog that concentrates on technology analysis, putting forward predictions and opinions on the intersection of technology and culture.

FWD+: where does the name come from?

FWD is a reference to email, the chains you may have seen at work or from family and friends (probably family), for example:

That's a typical example of a forwarded email subject line. To remove any doubt, due to its close association to email, the name of the blog is pronounced, "forward plus."

Similar to the idea of forwarding emails, this website shares content from other sources, but expands and develops it (the plus in FWD+). Rather than regurgitate and add to the noise, the goal is to look forward and provide novel viewpoints and stances to add to the discussion.

The design of the logo went through many iterations: different colour combinations, shapes and styles. I wanted to stick to simple shapes whilst making something easily recognisable and unique. Linking the logo to the site's name wasn't the goal, but I had an epiphany after splitting a triangle into three segments, then rotating it: 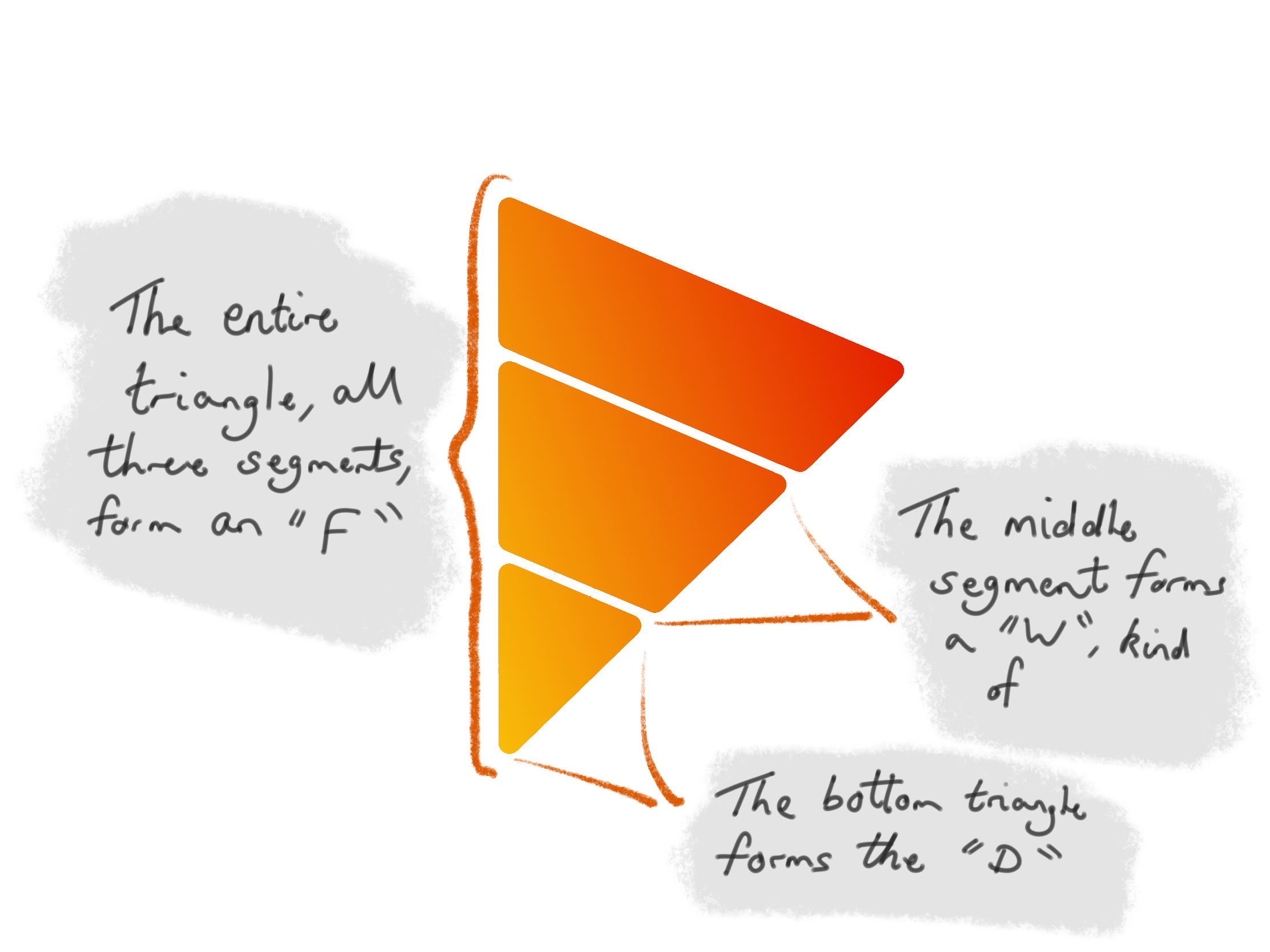 As the quick sketch shows, the F is the entire triangle, and the W and D are the middle and bottom segments, respectively. It was a lucky discovery.